“I think human consciousness is a tragic misstep in evolution. We became too self-aware. Nature created an aspect of nature separate from itself. We are creatures that shouldn’t exist under natural law… The honorable thing for our species to do is to stop reproducing and walk hand in hand, brothers and sisters, into extinction — one last midnight.”
~ Rust Cohle, ‘True Detective‘

Sitting comfortably within their climate-controlled homes and buildings, a tiny percentage of eco-conscience humans watches with morbid fascination as large numbers of animals drop like flies in a bug zapper. In the latest die-off, bats rain down from Australian skies; parrots, kangaroos and emus perish from heat exhaustion. Ominous signs of an unraveling web of life are everywhere to see, but the industrial world has become utterly disconnected from nature and pays little heed to such warnings. Rather, what holds their interest is Chris Christie’s Traffic-Gate. That our fate is bound to the well-being of Earth is a belief lost with the genocide of so many indigenous cultures. Capitalist carbon man resides in a totally fabricated world — he eats food mass-produced from fossil fuel inputs, drinks ‘purified’ water bottled in plastic, and at bedtime drowns out the noise of energy-gluttonous cities with the electronic recordings of ocean waves and forest sounds. But most absurdly, he ‘communes with nature’ through staged wildlife TV shows and eco-trip adventures. Rather than allow poachers and farmers free rein, the capitalists thought it wiser to extract profit out of the Earth’s dying ecosystems by tapping into the “green” industry of eco-tourism, another in a lost list of anthropocentric oxymorons.

Relentless marketing on TV, internet, radio, billboards, print, etc has created an unending cycle of desire and consumption, fueling the trivialization of life that feeds its commodification. The individual is reduced to a “buying unit” by the skyscrapers, institutions, and bureaucracy of capitalism, but in a future world of spent resources and civilization-destroying weather, the market won’t have much use for so many “buying units”. Introspection by many rational, sober, and clear-minded people since the publication of ‘The Limits to Growth’ has not altered the course of history to date; why would I think the human species would suddenly alter their behavior after having tripped so many ecological tipping points and feedback loops? Hindsight is 20/20 only if a lesson was learned the first time.

“…The basic truth between the lines of this press event [National Research Council (NRC) briefing on abrupt climate change] was that we are facing a world that is becoming increasingly hostile to humankind.

We are literally making the planet into a wasteland like this is some post-apocalyptic science fiction story. It is just shocking. And the most horrifying aspect of it all is that we’ve waited to reduce emissions so long that we’re exiting the win-win field of possible climate responses. We’re now headed into a world of lose-lose. That’s the news nobody wants to convey – or hear. But there it is.” – link

The cancer of hyper consumption and economic growth for never-ending profit has trashed the planet, but blind faith in the markets and techno-optimism are the siren’s call beguiling industrial civilization over the cliff. Capitalism likes efficiency; in its quest for greater efficiency, diversity – the essence of life – is being exterminated. Monoculture is death. More biodiversity means more resilience. A recent scientific paper purports to prove this long-held maxim:

“…when a lot of species are interacting and competing in an ecosystem, the ‘average’ interactions that any one species experiences are likely to be weaker than in a simpler, less diverse system. When there are a lot of different niches occupied by different species, we also expect different responses to environmental fluctuations among the community, meaning that some species inherently do better than others depending on the specific disturbance. Species-rich systems also tend to have more of what we call ‘functional redundancy‘, meaning that if one species providing an essential ecosystem function (e.g., like predation) goes extinct, there’s another, similar species ready to take its place…”

Biodiversity loss is not the only aspect of life being degraded. The planet is also losing cultural diversity – languages, crafts, religions, histories, ancient knowledge, etc. are disappearing as globalization reduces all of life to the status of a marketable commodity. Thousands of languages were once spoken in North and South America before the invasion of European powers. It’s interesting to note that in the Ojibwe language, and perhaps in most if not all native languages of North America, there exists no word to describe “greed” or the concept of personal property, but there are endless numbers of verbs to describe “every movement and temperature and visual sense of water.” After a few hundred years of progress, the white man has Wall Street and the natives have gambling casinos.

“In the Seventh Fire prophecy of the Anishnabek, each of the seven fires represent an era in human history. We are now in the time of the Seventh Fire. The task of the people of this age, including the Anishnabek and other red people, the yellow people, the black and the white, is to come together through choosing the road of cooperation. Without this, there will be no Eighth Fire, or future for Natives and others…

…Today, in the age of the Seventh Fire, the races are again faced with a choice. The two roads are the black road of technology and overdevelopment leading to environmental catastrophe, the other is the red road of spirituality and respect for the earth. Together, people of the world have to choose the right road, be of one mind, or the earth cannot survive…” ~ The Seventh Fire (Ojibwe) Prophecy

The “black road of technology and overdevelopment” is paved with the fallout of dead bodies and poisoned landscapes —nuclear meltdowns, oil and chemical spills, factory fires and explosions, etc., but to a very tool-centric species just itching to keep this omnicidal train going, geoengineering looks like the perfect ticket. It promises to allow industrial civilization to continue burning carbon while avoiding the nasty side-effect of catastrophic climate change. Unfortunately, human error and miscalculation, the bane of so many other industrial endeavors, will undoubtedly come into play. The ‘hacking’ of the Earth’s entire climate system represents the peak of hubris for modern man. Describing the conceit of our technological domination of the planet, Clive Hamilton states:

“Pursuing abatement is an admission that industrial society has harmed nature, while engineering the Earth’s climate would be confirmation of our mastery over it — final proof that, whatever minor errors made on the way, human ingenuity and faith in our own abilities will always triumph. Geoengineering promises to turn failure into triumph.”

The Earth’s carbon sinks are filling up and the twin problem of ocean acidification will need a techno-fix too. Complexity begets even more complicated problems. Our culture avoids the simple fact that humanity is vulnerable and dependent on the Earth, that life is fragile and interconnected, and that the importance of Murphy’s law is amplified exponentially when playing GOD with technology. Let’s also hope that the psychological effects of climate change don’t make the nuclear powers lose their cool. 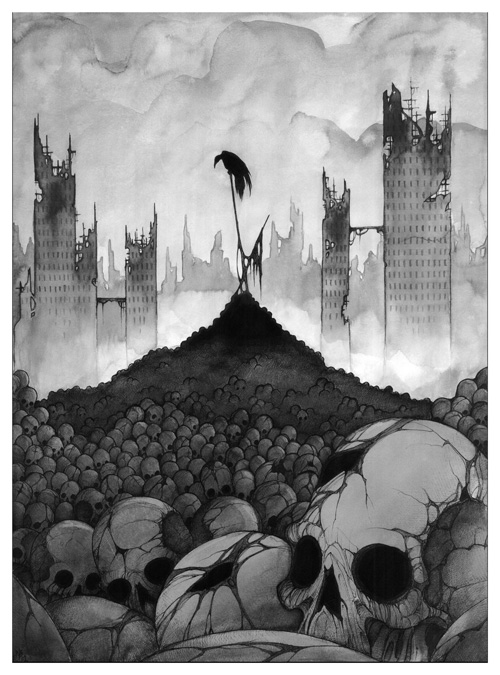 …A warm dry wind is all that breaks the silence
The highways quiet scars across the land
People lie, eyes closed, no longer dreaming
The earth dies screaming…