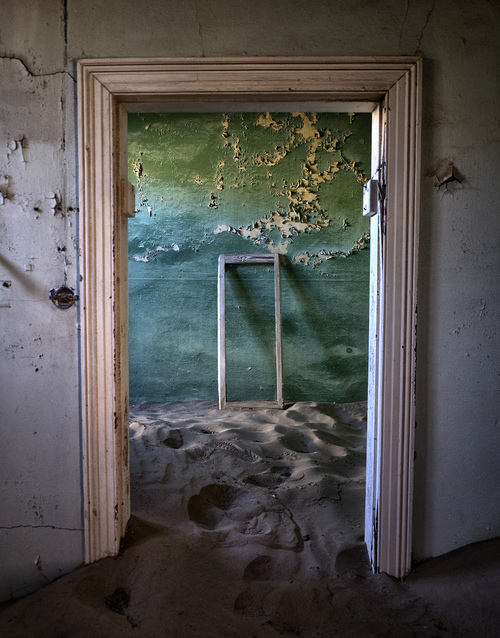 The Middle East is on the frontline of the multi-pronged crisis of overpopulation, resource depletion, and climate change. Fault lines in that region are widening as climate change exacerbates crop-destroying droughts, peak oil starves economies, and stressed populations scramble to survive. Advanced industrialized countries are buffered from the same fate only temporarily by their military and economic might. The oil-cursed Middle East also suffers from being in the crosshairs of industrial civilization’s insatiable appetite for the black stuff. Since the peak of conventional oil in 2005, the industrial world has not only turned to harder to extract and environmentally damaging unconventional sources of oil, but has also ramped up military intervention in order to keep the energy flowing. Access to resources has always been an underlying factor in all wars, but as climate change, resource depletion, and social disintegration escalate, the grip on foreign energy deposits by western powers becomes increasingly tenuous. Climate Change multiplies threats. Militarism and climate change feed off and drive each other:

The war machine of the American Empire is the single largest consumer of fossil fuels on the planet. 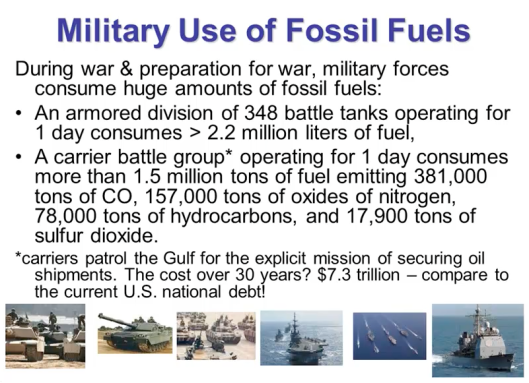 Our priorities are overwhelmingly skewed toward militarism in order to maintain the unsustainable, while the real threat of climate change grows ever stronger:

In the meantime, the false hope of technology maintains the illusion that our current way of life is inalienable. The industrialized monoculture farming that feeds the masses will quickly fade as synthetic fertilizers become too expensive to artificially replenish nutrient-depleted soils. Pesticides and antibiotics are losing their effectiveness as natural selection breeds super weeds and drug-resistant pathogens. Fresh water is also being sacrificed for fracking, tar sands production, and mountaintop mining. We appear to be systematically destroying any basis for future civilizations as we burn through what is left. “Forests precede mankind; deserts follow.”

Severe land degradation is now affecting 168 countries across the world, according to new research released by the UN Desertification Convention (UNCCD).

The figure, based on submissions from countries to the UN, is a marked increase on the last analysis in the mid-1990s, which estimated 110 states were at risk.

In an economic analysis published last week the Convention also warns land degradation is now costing US$490 billion per year and wiping out an area three times the size of Switzerland on an annual basis. – link

No techno-fix chicanery will bring back the melting polar caps or stop the series of runaway feedbacks loops unleashed from industrial civilization’s fatal attraction to fossil fuels. Our eyes simply don’t appreciate the full scale of climatic change now underway, eroding mankind’s food production, infrastructure, and socio-economic stability, in addition to degrading nature’s ecological resilience and biological diversity, both of which underpin all of mankind’s activities. The megatons of greenhouse gases expelled into the atmosphere by industrial activity everyday are as invisible to humans as the mountains of toxic plastic waste filling up the world’s oceans. Out of sight, out of mind until the effects become too obvious to ignore and too late to change. Overpopulation continues unabated and is in fact encouraged by the imperatives of economic growth; the environmental pressures are ignored as resources are methodically stripped and depleted to unrecoverable levels.

Despite the ingenuity and intelligence of the human race, we appear subject to the same rudimentary biological urges of the lowest single-celled organism which, if given favorable conditions, will uncontrollably multiply its numbers deep into overshoot territory until its food source is exhausted, finally extinguishing itself in a mass die-off. Environmental laws and initiatives appear to be no more than slight speed bumps in our one-way road to extinction. All this talk about curbing GHG’s, “going green”, and “saving the planet” are mere window dressings for our motorized hearse. Nice accoutrements, but the destination is still a grave.