On the eve of what could be WWIII and the further barbarization of the Middle East at the hands of the American Empire and its vassal states, I think it’s important we look behind the wall of pro-war corporate media and understand what the facts on the ground really are. The following essay is a reblog from a website I just discovered and it gets into the nitty-gritty of the blowback from America’s perverse foreign policy in regards to Syria. When a nation supports democracy in name only and crawls in bed with terrorists to carry out regime change, then an entire region eventually becomes destabilized and thrown back into the hands of those dark forces which America purports to be fighting against in its so-called “global war on terror”. In reality, the American corporate state would rather have foreign nations with brutal dictators installed who will carry out America’s bidding rather than a democracy which looks after the best interests of the local people. Why else would the U.S. have overthrown Prime Minister Mossadeq of Iran or become the strongman for the corrupt House of Saud if not for the black oily stuff to which we are so addicted? When it is said that “women are literally blacked-out in the public sphere” in Saudi Arabia, the connotations are quite literal. Below is a picture taken by a friend who has worked in Saudi Arabia. It depicts a department store advertisement display which has been altered to conform to their brutally misogynistic society. 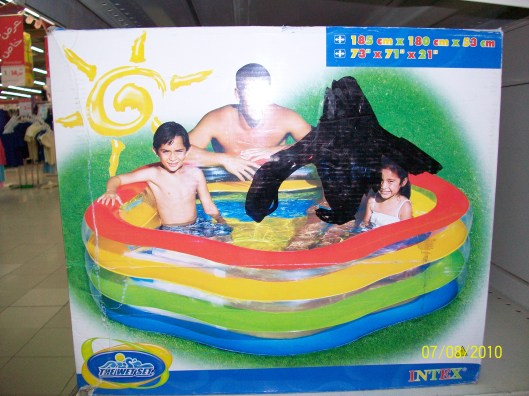 ‘Humanitarian concerns’ and ‘social justice issues’ are merely empty rhetoric used by our sociopathic leaders as cover for protecting the grossly unjust social hierarchy of global capitalism. Some call this “corporate feudalism” while others say it is endemic to capitalism. One only has to look at the growing global wealth disparity to know this is true. The elite are drooling for war while the world races towards catastrophic resource depletion, environmental apocalypse, collapse of industrial civilization, and a new Dark Age.

Syria: A Critique Of Joshua Landis

One important issue that was missing from his talk (and is missing in almost all discussions on Syria) is the threat to the rights of women if the Assad regime falls. This is no small issue. One thing that surprised me during my visit to Syria is how Western it was compared to other Arab and Muslim countries in the region. Women’s dress is not restricted in Syria and they play a very important public role in society when compared to other Arab countries. Muslim fundamentalists and suicide bombers in Syria do have a Sharia Law agenda that they want to impose on the country. This is not theory. All one has to do is look to neighboring Iraq to see the deterioration of women’s rights in the post-Saddam era. Women used to wear miniskirts, show their hair and walk without fear in Baghdad. Now the situation has completely reversed. Women are forced to cover and are expected to stay at home. If they do not abide by this social practice, they are publicly shamed, and, in more extreme forms of Sharia justice, are raped and murdered.

An Iraqi friend told me that when he returned to Baghdad after the war he was stunned that women were no longer even comfortable speaking to him in public for fear of being thought of as whores. His experience of the status of women in public before the war was the polar opposite of the reality that one is now faced with in Iraq.

One should also note that the situation in neighboring Turkey has taken a turn for the worse in recent years under the Sunni AKP government. The rate of violence against women has sky-rocketed. Wives, fiancés and girlfriends have been murdered by their male partners at a rate that is 1400 percent higher than 7 years ago. This is the same AKP government that is supplying their Sunni rebel ‘brothers’ in Syria with weapons.

There is a severe lack of discourse about what the consequences are for women if and when the Assad regime falls in Syria. It is clear why the Muslim extremists working in concert with Al-Qaeda in Syria do not talk about women in their fight for ‘democracy’. Women for them are marginal, servile and functional creatures who are to be neither seen nor heard in public life.

In the question and answer period after Mr. Landis’ you will note that there is a Syrian Christian man asking a question about the rights and status of Christians in Syria after a Sunni extremist takeover of the country. He is very concerned about this issue and he has good reason to be. Since the beginning of the so-called ‘revolution’ there have been many incidents of rebels killing Christians and bombing churches all over Syria. The chant of the fighters has been: “The Alawite and Christians to Beirut!” The intentions can’t be made any clearer. Nobody will be safe in Syria after Assad except orthodox Sunni Muslims. Mr. Landis made this very clear to the Christian man when he said that the solution for Turkey was ethnic cleansing. The reason there is no problem in Turkey with Christians is because there are no more Christians. They used to be 20% of the population. Those who were not killed or deported were forced to convert to Islam. All that is left of Christianity in Turkey are ancient Christian sites that are advertised to attract tourists to the country. Istanbul, which is still the seat of the Eastern Orthodox Church, barely tolerates what is left of the Christian community there. The Church has virtually no sovereignty and is at the mercy of the government and its flock has dwindled to almost nothing, when compared to its vibrant past.

If ethnic cleansing and forced conversion has been Turkey’s solution for diversity, take a look at the other country that is supplying weapons and Islamist fighters to topple Assad: Saudi Arabia. There is no country in the world that is as intolerant and anti-democratic as Saudi Arabia. Churches are illegal in that country. Women are literally blacked-out in the public sphere in dress. Saudi is also the only country in the world where women are not allowed to drive. Women are subservient to men in the name of extreme Islam and Bedouin tradition. If Turkey and Saudi are the main suppliers of weapons and training of the rebels in Syria, one needs to reflect on what kind of culture is intended to be put in place after the fall of the secular and tolerant regime that is currently hanging on to power.

The Kurdish issue is an extremely volatile issue in Syria. Assad extended greater freedoms and autonomy to the Kurds via political reforms passed after the initial protests had begun. The Kurdish leadership in Syria has already openly stated that if Syria is attacked by Turkey, they will fight on the side of Assad. This issue presents potentially grave consequences of blowback for Turkey. In recent days the Turkish Prime Minister stated that Turkey may need to invade northeastern Syria to crush the Kurds there if they get too powerful. This would mean that Turkey would be fighting its war with the Kurds on three fronts. It is already battling a guerrilla insurgency within its borders and regularly attacks Kurds in northern Iraq…. Read the entire essay

24 thoughts on “‘Friendly’ Dictators Are Welcome”