No matter if the weekend has arrived or not, when I feel like life has become a grotesque parody of itself then it’s time for another installment of ‘Weekend Funnies for the Depressed Collapsitarian’…

Too close to the truth…

An animated GIF from graphic wizard ABVH (via Featured E-Magazine):

Years after they have destroyed main street, central banks have recently admitted that their policies benefit only the wealthy… 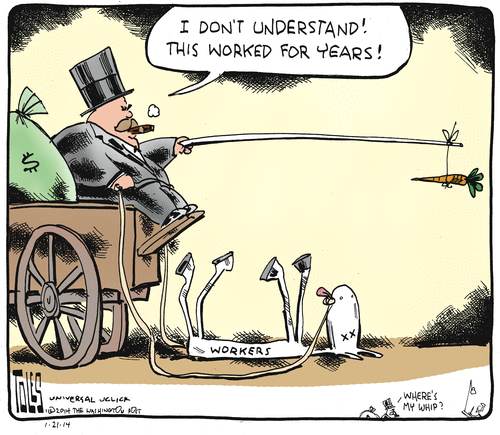 The inconvenient truth that GDP=CO2 Emissions…

The power of positive thinking for the cancer man can be applied to Homo Economicus and his refusal to change his ways in spite of the collapsing biosphere… “It took inner strength to ignore all those climate scientists.”

Debate: ‘Are Violent Video Games Adequately Preparing Children For The Apocalypse’…
“They are going to need the more practical skills like how to build a shelter from abandoned cars or how to get drinking water by collecting the morning dew in human skulls.” 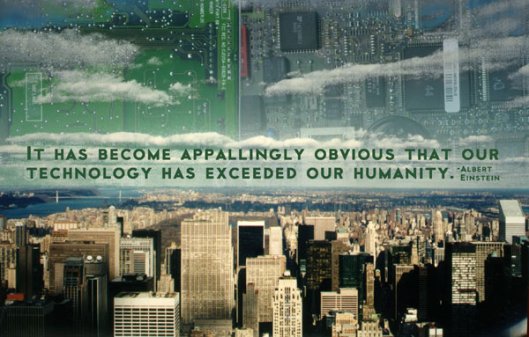 An achieved goal of capitalist industrial civilization was the systematic reduction of nature to a simple component of the economy. Landscapes of rivers, lakes, forests, and meadows were replaced by the concrete, steel, and asphalt of cityscapes. The build-up of toxic wastes and byproducts of industrial civilization were seen merely as external problems to be solved via engineering and technology. In the grand narrative of material progress, industrial man put himself at the center of the universe, the lead actor and hero who would always survive and triumph. He saw no problem with the complete subjugation of the wilderness, taking more from the land than was given back, and reducing biodiversity to a shell of its former self in the name of economic growth. The dominant mindset was summed up thusly…

“…nature is a malignant force with useful aspects that must be harnessed, and useless, harmful ones that must be shorn of their power. They spend their energy adapting nature to their purposes, instead of themselves to her demands. They destroy pests of crops and men, they build dykes and great dams to avert floods, and they level hills in one spot and pile them up in another. Their premise is that nature will destroy them unless they prevent it…” ~ Clyde Kluckhohn

In the collective consciousness of industrial civilization, man was exempt from falling victim to the 6th mass extinction. The future narrative of people in the modern age never included:

Cocooned away from the elements as they were, few city dwellers noticed the creeping deterioration of the planet’s biosphere. Their artificial world, filled with the digital screens of computers, televisions, electronic billboards, and sundry other micro-computer devices, kept the public preoccupied with a constant stream of infotainment, celebrity gossip, sports, and political spectacles. The popular line of thought was that the natural world was too resilient to collapse from man’s activities; periodic efforts of environmental remediation would be all that was needed to keep business-as-usual afloat. Generational amnesia cast a false sense of security over the unwashed masses. Rivers and streams, once teeming with fish and aquatic life, were now laden with toxins, heavy metals, and plastics. Moose and bison no longer roamed the fragmented wilderness; the remaining few were set aside for bioengineering experiments in a last-ditch effort to save them. The whole web of life with all its keystone species from microbes and insects to large terrestrial and aquatic mammals was unravelling. Pests, viruses, and pathogens ran rampant in the new disorder of the planet. Scientists talked of tipping points, but no one really knew when such red lines in biospheric stability would be crossed or if they had already been breached. Like a runaway freight train, industrial civilization had indeed passed many tipping points long ago. Few thought there would be such an abrupt downward spiral, seemingly without warning. The first law of thermodynamics was being realized on a system-wide scale.

Modern man was thought to have been infinitely adaptive and clever, but the linear-thinking that dominated the culture was riddled with too many blind-spots to prevent its inevitable downfall. As long as the same economic system and mode of living persisted, no amount of new technology would solve the root problems. Since the mid 1970’s, the industrialized world had been living beyond the total carrying capacity of the Earth for decades and even created a day to recognize the transgression which would arrive a few days earlier each year. Various reports of imminent catastrophe were published, but to no avail. Everyone had their mental crutch to fool themselves into believing that the day of reckoning would never come. Some, like the fanatical zealots of religion, rejoiced that the end was upon us while others were paralyzed with fear and despair. The all-pervasive mainstream cult of money worship, consumption, and economic growth gave rise to other doomsday cults who heralded the end of time.

Mother nature took no prisoners; there was no escaping her ironclad laws. Mass starvation, war, and pestilence rapidly whittled the human population down to small pockets of survivors, but then even those few post-apocalyptic tribes soon declined and disappeared until the day arrived that only one human walked the Earth. One lone human survivor out of the billions that once were.

He survived the pandemic that wiped out roughly three-quarters of the global population. He survived the nuclear meltdown and craziness of the food wars and nuclear terrorism. And thus far he survived climate chaos by constantly moving. MRE’s were mass-produced for the general public and stored in most cities when the agricultural system started to show signs of imminent collapse. Even after all these years, the last human still found these warehouses of preserved food to be an invaluable source of sustenance, supplementing his diet with the occasional cockroach, rat, or wild pig.

How did the last man on Earth spend his time when not scavenging for food, water, and other essentials? He was on a search to find other humans of course. How could he have known that he was the sole survivor? Without electricity, there no longer existed any sort of global communication system. The one solar-powered/hand crank shortwave radio he had in his backpack had yet to pick up any signals, but he would religiously take it out every night to scan the frequencies for an hour or two. To break the deathly silence of the world, he would occasionally play the assorted music files that were on his wind-up mp3 player. He especially loved their sound inside the expansive corridors of old libraries he visited during his trek across the continent. With his life always in jeopardy, he found that a good book was the best form of escapism; compromising his health and safety with mind/mood-altering drugs was not an option in a world devoid of hospitals and medicine. And sex? Well, you’ll have to use your imagination for that. He certainly did. Such solitude, a prison cell of solitary confinement spanning the entire planet, would have driven most to madness and suicide, but he handled the loneliness day by day and with stoicism.

In his early years, he experienced a taste of working at a 9-5 job, driving a car and flying on jumbo jets, but he didn’t miss any of it really. He had been one of those who had read extensively about the unsustainability of the global economy and about the nature of ecological overshoot and collapse, and he had prepared for it. He held no illusions of a new civilization being reborn out of the ashes of capitalist industrial civilization. Capitalism, he knew, held too tight of a grip on modern man, and the psychological barriers of the masses prevented them from seeing the end of everything concerning the human experience …forever. As the weeks, months, and years passed by and he grew older, he began to reconcile with the idea that he was very likely the last person left alive. No need to leave any more messages on roof tops, in vacant parking lots, or over the empty airwaves. No one was listening. No one was coming. There really was no prospect of growing old gracefully in this new reality. He had yet to find some small pocket of unpolluted land that did not register on his Geiger counter. So he made a pact with himself and the pistol he carried that when his health and strength no longer allowed him to eke out an existence, he would not be alive when the wild dogs came for him.

Civilizations die from suicide, not by murder.”