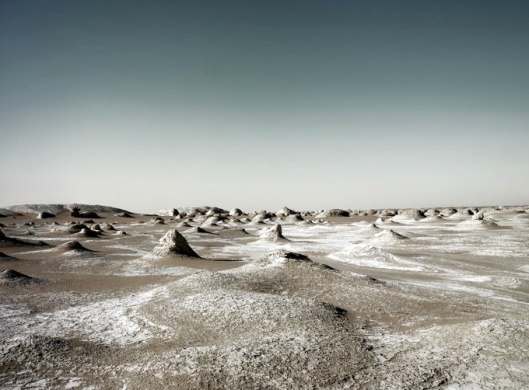 …we encounter another fact about our planetary life: the fragility of the balances through which the natural world that we know survives. In the field of climate, the sun’s radiations, the earth’s emissions, the universal influence of the oceans, and the impact of the ice are unquestionably vast and beyond any direct influence on the part of man. But the balance between incoming and outgoing radiation, the interplay of forces which preserves the average global level of temperature appear to be so even, so precise, that only the slightest shift in the energy balance could disrupt the whole system. It takes only the smallest movement at its fulcrum to swing a seesaw out of the horizontal. It may require only a very small percentage of change in the planet’s balance of energy to modify average temperatures by 2C. Downward, this is another ice age; upward, a return to an ice-free age. In either case, the effects are global and catastrophic.
~ Barbara Ward and Rene Dubos (Only One Earth: The Care and Maintenance of a Small Planet)

In my two posts about climate tipping points, I spoke of the Amazon forest and boreal forests as specific tipping points, but we can lump the planet’s entire collection of wood, forest and jungle ecosystems into one global system that will be decimated in the current human-generated climate armageddon. Man will realize he is just a temporary visitor of planet Earth, soon to be evicted by the cruel and unforgiving laws of nature. The following factors, now well underway, will obliterate the Earth’s tree ecosystems in the coming decades: massive pest outbreaks like that of the bark beetle into new regions whose climate zones have been altered, hotter and more severe droughts, the spread of invasive weedy plants which act as fuel for bigger and more devastating wildfires, and the spread of tree-killing diseases.

There are four recent articles in the news which describe how we are fast converting the world’s woods, forests, and jungles from massive carbon sinks into massive carbon emitters, ultimately to treeless wastelands: 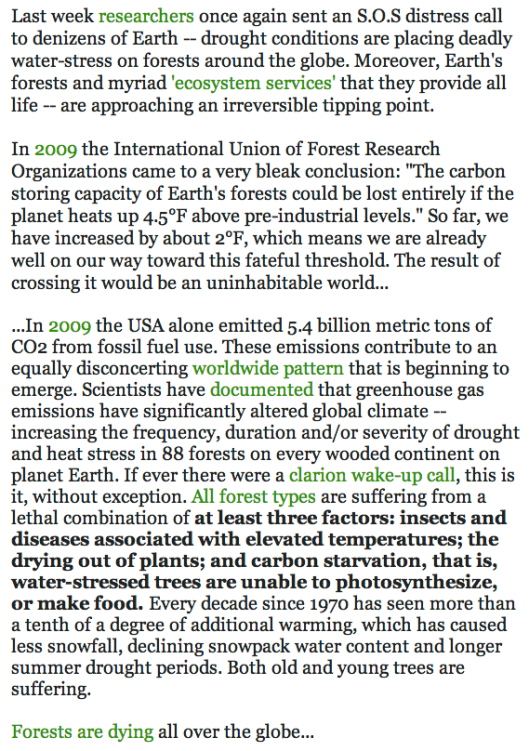 …and the 4th article: 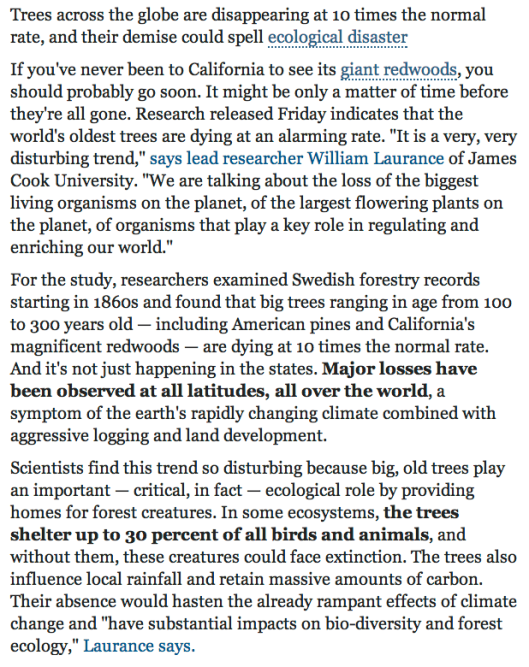 As explained in previous posts, our present socio-economic system along with realpolitiks will prevent the human species from avoiding this tipping point:

These studies sound a warning bell that we can expect to see forest diebacks become more widespread, more frequent and more severe — and that no forests are immune,” Engelbrecht continued. “The ramifications of this scenario are diverse and, in many respects, dire: forest mortality will be accompanied by changes in species composition, changes in ecosystem function and losses of services and biodiversity.

Professor Frank Fenner’s prediction will invariably come to pass. And the intuition of the unwashed masses is correct – we are living in End Times:

But no ‘believers’ will be saved from this eco-apocalypse and no God will appear. The only thing visited upon mankind will be his own self-annihilation brought on by ignorance, hubris, and greed.