Hello dominant life form of planet Earth. Yes, that means you Homo Sapiens. I’ve watched as over the millennia you evolved from a primitive ape-like hominid species, surviving purely by instinct, to the technology-wielding, sophisticated-thinking creature of today. Truly, the planet became your smorgasbord and you have partaken freely. As a matter of fact, you have very nearly emptied the planet’s entire refrigerator and cupboards and are now preparing to lick your plate clean. I’ve been throwing up some warning signs, especially this past year, to try to get your attention and perhaps make you reconsider your current omnivorous appetite. After all, you do share the planet with other life forms who have been hoping someone or something will put an end to your callous industrial rampage. I’ve even set in motion a sort of evolutionary check-and-balance, a doomsday device if you will, in the form of atmospheric heat-trapping gases, ensuring your demise just in case you don’t get the message of behavior modification. In other words, your dominant socio-economic paradigm of capitalism is fatally flawed. 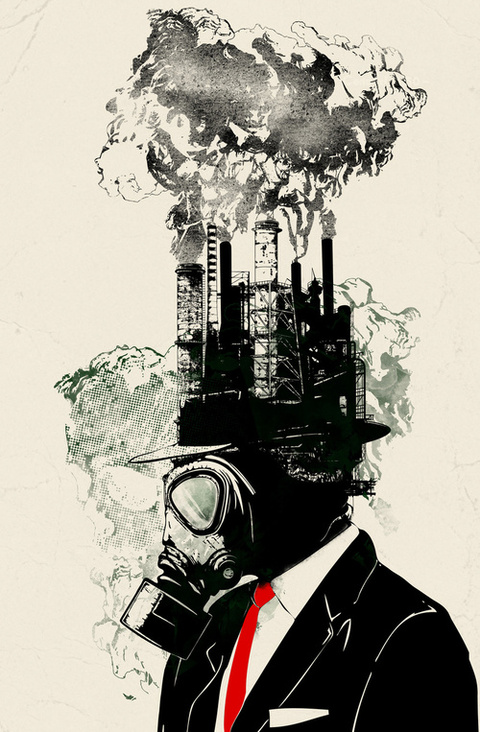 Your voracious appetite for the world’s natural resources — fish, timber, potable water, arable land, minerals, et al. — continues unabated. And after consuming them, you leave behind mountains of waste and destruction. Does it always take a crisis before you creatures take action? Instead of waiting until you suffocate to death in a world of hypoxic oceans and dead forests, try listening to those lone voices of dissent screaming for your attention:

Look, I have news for you. The human economy does not take precedence over the Earth’s natural ecological processes which have evolved over millions of years to provide you with clean water, clean air, fertile land, and productive plant and animal life. All of these priceless necessities have been given to you at no charge to your accounting ledger. I guess free lunches are something no human can refuse, but the bill will come due no matter how you try to hide it by pushing it off onto the environment and future generations. In a planet without a stable biosphere, your glimmering metropolises with their megalithic concrete and steel structures reaching heavenward are nothing more than fleeting sand castles to be washed away by the next rogue wave of a surging sea… Sandy was just a warm-up event. Perhaps a new ‘Dust Bowl’ event and heat waves down under demanding a new color code on the weather map and droughts rendering useless a nation’s hydroelectric power will do the trick. I suppose as long as the $tock exchanges of the world are operable, your “business as usual” scheme of perpetual growth and converting all the natural world into capitalist symbols of wealth will carry on its merry way right over the edge of global extinction. And you thought the “fiscal cliff” was something to worry about?

As a mentor and intellectual peer of this site said recently, “tribes and societies that did master effective class consciousness thrived, for a very long time. Those that didn’t, don’t.” At today’s massive scale of production and consumption, the human and environmental exploitation characterized by modern industrial capitalism undermines the long-term existence of mankind along with every other living organism on the planet. Capitalism shoehorns everything into its profit-seeking regime, no matter if that means global genocide on a scale never heretofore seen:

…Actually, the more I reflect on it, the clearer I see the logic, the rationale, behind the bankers’ and the capitalists’ push for privatization.  It is not just more profits they are after, not just share price or corporate valuation; no!  They are after mass extermination, genocide on a grand scale – of the world’s needy, the under-funded, the unwanted, the uncivilized, the savages and the barbarians, the commies and the Islamists, in short, elimination of all of the Others.

The big boyz have seen all the data and crunched all the numbers, and it is clear to them – the earth is running out of resources, Mars is -50 C all of the time, and we can no longer afford to carry all of this excess baggage here on the planet — all of these miserable, thankless, do-nothing mouths to feed.  So the plan is brilliant.  You reduce the number from 7+ billion by at least 33% without firing one shot.  You simply privatize all natural resources and then price access so that the bottom third of the globe’s population cannot afford it.  And so, they die; it will be the biggest die-off of the Anthropocene epoch…

You ignore my overt signals at your own peril.