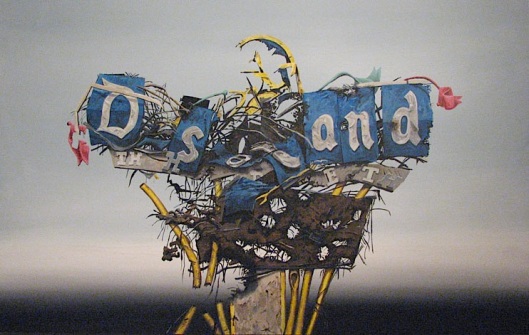 Capitalism has, throughout its history, built itself off the backs of the weak through dispossession, slavery, colonialism, technology and military power. Protecting the capitalist system into the 21st century, U.S. military served as the all-powerful proxy force of the global corporate elite. In the waning days of modern-day civilization, transnational corporations found even more ways to amass power and squeeze out every last penny from the Earth to the gods of capital. In the name of ‘free trade’, secretive agreements with alphabet soup-acronyms like TTP and TPIP were concocted to protect and expand profits as well as investor returns at the expense of all else, including the sovereignty of nations and the very habitability of the planet. Corporations became the new kings and queens, tsars and tsaritsas, bishops and popes. The last grab for what was left could now be done more swiftly while circumventing the laws of nations.

“…Capitalism has an inbuilt wondrous capacity of resurrection and regeneration; though this is capacity of a kind shared with parasites – organisms that feed on other organisms, belonging to other species. After a complete or near-complete exhaustion of one host organism, a parasite tends and manages to find another, that would supply it with life juices for a successive, albeit also limited, stretch of time.

A hundred years ago Rosa Luxemburg grasped that secret of the eerie, phoenix-like ability of capitalism to rise, repeatedly, from the ashes; an ability that leaves behind a track of devastation – the history of capitalism is marked by the graves of living organisms sucked of their life juices to exhaustion…” ~ Zygmunt Bauman

In a world of finite resources controlled by a tiny capitalist class, there would eventually only be two classes remaining – the über-wealthy or global elite and the vast underclass of disposable workers who eked out a subsistence existence. The wealth of society continued to be funneled upwards to the corporate overlords by way of deregulation, privatization, low or nonexistent tax rates, control of the legal system, and the cutting away of any last scraps of a social safety net.

Preoccupied by their digital screen devices and satiated on mass-produced junk food, the plebs never really noticed they were living in an open-air prison. In the meantime, the walls of a police state rose up to protect the sociopathic elite. As long as the ‘consumers’ were kept in a continual state of ‘amusement madness’ and on the treadmill of work exhaustion, there would be no time for contemplating the reality of climate change, the ever-widening wealth gap, the rise of a corporate fascist state, or the disappearance of the natural world.

“Living in an age of advertisement, we are perpetually disillusioned. The perfect life is spread before us every day, but it changes and withers at a touch.”
~ J. B. Priestley

This Ponzi scheme economy was so entrenched in the psyche of the general populace that essentially none questioned its validity, even in the face of increasingly chaotic weather and rising seas, mountains of toxic waste, lifeless oceans, epidemic industrial disease, and grotesque wealth maldistribution. The right to seek profit trumped the health and safety of humans, the stability of the environment, and the legal recourse of governments on behalf of their citizens. National borders were effectively erased and a global corporatocracy now ruled the planet. Ironically, the one world government feared by so many right-wing conspiracists had become reality without any protest from them.

Acid rain and erratic weather, the unintended consequences of half-baked geoengineering fixes, forced most food production into industrial greenhouses. Due to the chemical pollution levels in the environment, all water had to be treated before it was used for anything, and gas masks became ‘everyday outdoor wear’ like hats and umbrellas. Most stayed indoors to escape such hazards, immersing themselves in the artificial environments of virtual reality software. Zoos became the only sanctuaries for wildlife, their sperm safely kept frozen for the day humans might want to de-extinctify them. National parks were privatized and plastered with corporate logos. The ranks of the homeless and destitute swelled, but most soon found themselves living inside the cell of a private, for-profit prison where they toiled away as cheap labor contracted by the corporations. Such crises were always looked upon as business opportunities, a niche to fill in the profit-seeking mind of homo economicus. Commodification and commercialization of everything became completely normalized.

Taken to the extreme and turned into a rigid belief system, all ideologies can become dangerous. When the ethics of a society bow to laissez-faire capitalism, life in the U$A becomes a cruel joke:

Need I go further? The day that the movie ‘Idiocracy’ is looked upon as genius and prophetic, civilization will have become a parody of itself. I think that day has arrived.