No matter if the weekend has arrived or not, when I feel like life has become a grotesque parody of itself then it’s time for another installment of ‘Weekend Funnies for the Depressed Collapsitarian’…

Too close to the truth… 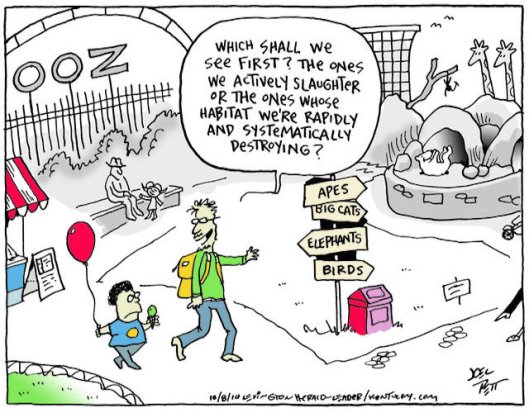 An animated GIF from graphic wizard ABVH (via Featured E-Magazine):

Years after they have destroyed main street, central banks have recently admitted that their policies benefit only the wealthy…

The inconvenient truth that GDP=CO2 Emissions…

The power of positive thinking for the cancer man can be applied to Homo Economicus and his refusal to change his ways in spite of the collapsing biosphere… “It took inner strength to ignore all those climate scientists.”

Debate: ‘Are Violent Video Games Adequately Preparing Children For The Apocalypse’…
“They are going to need the more practical skills like how to build a shelter from abandoned cars or how to get drinking water by collecting the morning dew in human skulls.”

41 thoughts on “Weekend Funnies for the Depressed Collapsitarian #10”