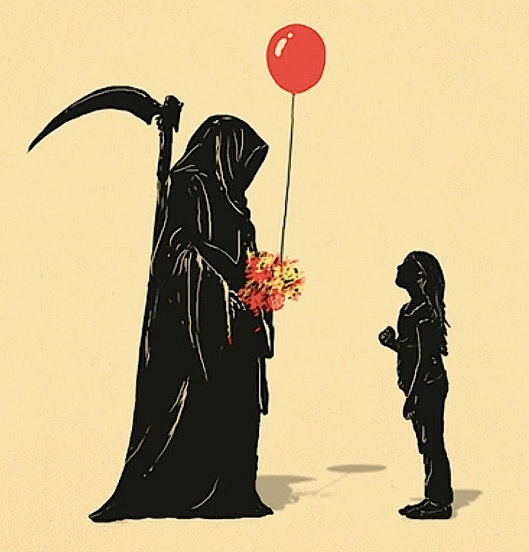 As the recent news stories below illustrate, extreme weather is on the rise and has been scientifically linked to human-induced climate change. I find it amazing than in the midst of the beginning stages of collapse of industrial civilization, many will attribute the disintegrating environment to natural phenomenon, biblical and other religious prophecy, or the lizard illuminati. I suppose the real reason behind America’s hi-tech surveillance panopticon is to keep the hungry and destitute masses from overrunning the walled compounds of the elite when climate change and peak net energy really kick into gear. These days the number of headlines pointing to environmental collapse are overwhelming; choosing one is like shooting fish in a barrel. The population of Atlantic Puffin bird, called the ‘marine canary in the coal mine‘, has reportedly been “losing body weight and dying of starvation, possibly because of shifting fish populations as ocean temperatures rise.” The Arctic, an essential temperature regulator for the planet, is melting fast and releasing a carbon time bomb:

Over hundreds of millennia, Arctic permafrost soils have accumulated vast stores of organic carbon – an estimated 1,400 to 1,850 petagrams of it (a petagram is 2.2 trillion pounds, or 1 billion metric tons). That’s about half of all the estimated organic carbon stored in Earth’s soils. In comparison, about 350 petagrams of carbon have been emitted from all fossil-fuel combustion and human activities since 1850. Most of this carbon is located in thaw-vulnerable topsoils within 10 feet (3 meters) of the surface.

But, as scientists are learning, permafrost – and its stored carbon – may not be as permanent as its name implies. And that has them concerned.

“Permafrost soils are warming even faster than Arctic air temperatures – as much as 2.7 to 4.5 degrees Fahrenheit (1.5 to 2.5 degrees Celsius) in just the past 30 years,” Miller said. “As heat from Earth’s surface penetrates into permafrost, it threatens to mobilize these organic carbon reservoirs and release them into the atmosphere as carbon dioxide and methane, upsetting the Arctic’s carbon balance and greatly exacerbating global warming.”

…“The Arctic is warming dramatically – two to three times faster than mid-latitude regions – yet we lack sustained observations and accurate climate models to know with confidence how the balance of carbon among living things will respond to climate change and related phenomena in the 21st century,” said Miller. “Changes in climate may trigger transformations that are simply not reversible within our lifetimes, potentially causing rapid changes in the Earth system that will require adaptations by people and ecosystems.”…

Adaptation will likely not be possible by humans, and as far as our sprawling steal and concrete cities are concerned – they’re toast.

…“Some of the methane and carbon dioxide concentrations we’ve measured have been large, and we’re seeing very different patterns from what models suggest,” Miller said. “We saw large, regional-scale episodic bursts of higher-than-normal carbon dioxide and methane in interior Alaska and across the North Slope during the spring thaw, and they lasted until after the fall refreeze. To cite another example, in July 2012 we saw methane levels over swamps in the Innoko Wilderness that were 650 parts per billion higher than normal background levels. That’s similar to what you might find in a large city.”…

The next headline sums up the climate policy of all governments – a joke. Business-as-usual will continue until it ain’t so usual anymore. Insurance costs will skyrocket and the wrath of nature will roll back all the transient wealth humans have built up atop the backs of our fossil fuel slaves. Externalized costs will be paid back in the wreckage of a civilization which thought of itself as superior to and separate from the natural world.

Reading the inklings of future trouble that the next three headlines portend, you’ll see global famine on the horizon: 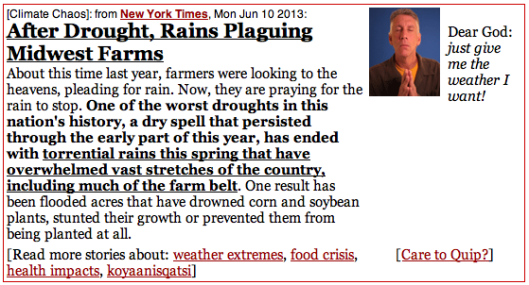 He made it clear we can’t dismiss these changes as an aberration.

“The latest science tells us that the threat of a changing climate is new and different from anything we’ve ever tackled,” Vilsack said.

A historic multi-billion dollar flood disaster has killed at least eighteen people in Central Europe after record flooding unprecedented since the Middle Ages hit major rivers in Austria, the Czech Republic, Germany, Poland and Slovakia over the past two weeks. The Danube River in Passau, Germany hit the highest level since 1501, and the Saale River in Halle, Germany was the highest in its 400-year period of record. Numerous cities recorded their highest flood waters in more than a century, although in some locations the great flood of 2002 was higher. The Danube is expected to crest in Hungary’s capital city of Budapest on June 10 at the highest flood level on record, 35 cm higher than the record set in 2006. The flooding was caused by torrential rains that fell on already wet soils. In a 2-day period from May 30 – June 1, portions of Austria received the amount of rain that normally falls in two-and-half months: 150 to 200 mm (5.9 to 7.9″), with isolated regions experiencing 250 mm (9.8″). This two-day rain event had a greater than 1-in-100 year recurrence interval, according to the Austrian Meteorological Agency, ZAMG…

…If it seems like getting two 1-in-100 to 1-in-500 year floods in eleven years is a bit suspicious–well, it is. Those recurrence intervals are based on weather statistics from Earth’s former climate. We are now in a new climate regime with more heat and moisture in the atmosphere, combined with altered jet stream patterns, which makes major flooding disasters more likely in certain parts of the world, like Central Europe. As I discussed in a March 2013 post, “Are atmospheric flow patterns favorable for summer extreme weather increasing?”, research published this year by scientists at the Potsdam Institute for Climate Impact Research (PIK) in German found that extreme summertime jet stream patterns had become twice as common during 2001 – 2012 compared to the previous 22 years. One of these extreme patterns occurred in August 2002, during Central Europe’s last 1-in-100 to 1-in-500 year flood. When the jet stream goes into one of these extreme configurations, it freezes in its tracks for weeks, resulting in an extended period of extreme heat or flooding, depending upon where the high-amplitude part of the jet stream lies. The scientists found that because human-caused global warming is causing the Arctic to heat up more than twice as rapidly as the rest of the planet, a unique resonance pattern capable of causing this behavior was resulting.According to German climate scientist Stefan Rahmstorf, “Planetary wave [jet stream] amplitudes have been very high in the last few weeks; we think this plays a role in the current German flooding event.

The biggest lie ever told is that we will be able to adapt to or mitigate a planet-wide shift in weather patterns, temperatures, and sea level rise on such a short time-scale as to be instantaneous in geologic records. Our fall – a tragicomedy of hubris, self-delusion, greed – will be more precipitous than our rise.

22 thoughts on “The Grim Future Seen From Current Headlines”