Hello my fellow Earthlings. We think we’re so fucking clever, don’t we. We’ll probably revert to our rodent instincts and burrow underground when the shit really hits the fan. With the eco-apocalypse fast approaching, the best way for the human species to redeem itself would be to voluntarily undergo a cultural and spiritual transformation on a global scale. When I say spiritual, I mean honoring the ground we walk on and not some false deity. Science, not mythology, is the basis for my beliefs. This Earth is all we really have. Start caring for it and respecting it with the same reverence and homage we pay to our electronic toys of mass distraction, i.e. TV, iphones, video games, computers, etc…

Know that this culture of self-worship and materialism is sending our species to the dustbin of failed evolutionary experiments, most certainly by the end of this century if not mid-century. The evidence is all around us if only we care to open our eyes.

Below is a video I put together to illustrate the suffocation of the real world beneath the concrete, steel, and asphalt world humans have superimposed on it. We have worked to replace what is genuine and long-lasting with something that is artificial and unsustainable. And all the science says this world we have created from fossil fuels cannot be maintained in the long run, not even with so-called renewable energy. On top of that mess, we are wrecking the planet’s biosphere and ensuring that our descendants will have no chance to experience nature or a habitable planet. We have quite literally destroyed our only true home, leaving us vulnerable to the vicious elements of the outside world which are growing ever worse in the form of climate change, resource depletion, and environmental degradation.

I’m afraid that confronting this civilization-ending calamity is not a solo endeavor, but must be a global undertaking. As someone said on this site before, the success of a society, be it an ancient tribe or a technologically advanced people, depends on whether there is cooperation and shared sacrifice. I don’t have to tell you that in today’s world, such traits are in short shrift. Individualism and self-interest dominate over any sort of collectivism and altruism. Self-glorification and the almighty profit motive are not going to solve these problems. The solution for global ecological destruction will not be found in an accounting scheme or any other such capitalist interest.

It’s time to face what we have done to the planet and ourselves. I don’t expect any such great awakening to occur. I’m fairly confident that we will stumble along into total collapse with all the usual mayhem that ensues in such an event – drought, famine, pestilence, and war. We humans had such promise, but we’re throwing it all away. If only we would grow up. 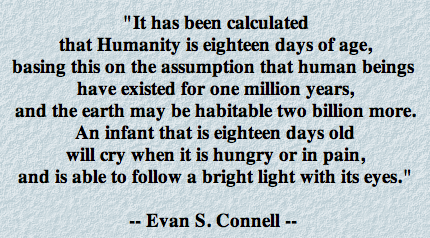