I heard about this dubious award via Your Medieval Future. Why did it take so long for this guy to get the award?… 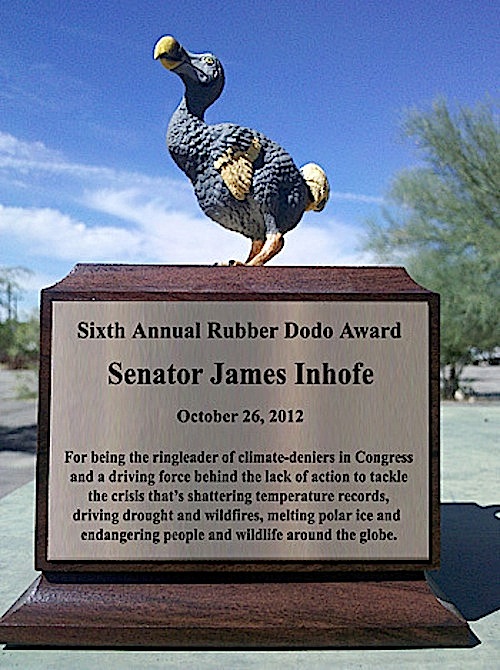 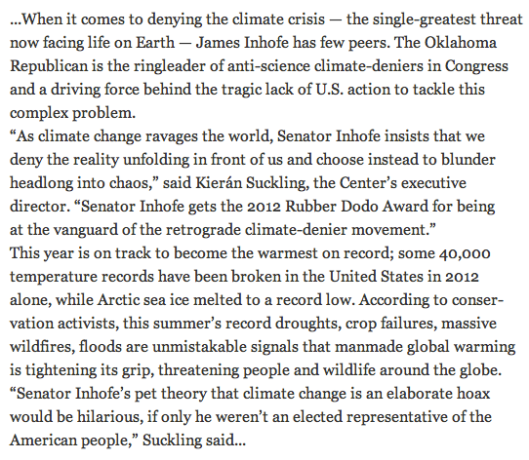 And here is Senator Inhofe’s politically polarizing response, spoken like a true anti-science zealot and mouthpiece for the fossil fuel industry:

I am truly honored that yet another radical environmental group has given me an award for my efforts to put a stop to President Obama’s far-left global warming agenda,” Senator Inhofe said.  “The Center for Biological Diversity should be pleased to know that my award will have a prominent place in my office, along with all the others I have been proud to receive over the years.  As the top Republican on the Senate Committee on Environment and Public Works, I have worked every day to expose the radical left’s extremist agenda aimed at ending American production of oil, gas, and coal because of the devastating consequences it will have on the American people.

Despite the fact that some of us are intelligent enough to see the coming collapse from unmitigated depletion of the earth’s non-renewable resources, overpopulation, climate disruption from the massive burning of fossil fuels worldwide, the human-induced 6th mass extinction, CO2-acidification of the oceans, and the resultant destruction of our modern industrial agriculture base, we are all lumped into the category of ‘radical left extremists‘ for recognizing such scientific realities. In Inhofe’s world, there is no environmental crisis and humans can adapt to whatever toxic sludge pile industrial civilization creates out of the planet. In a world where the true conservatives are those who want to keep the planet habitable for humans, people like Senator Inhofe will ensure that we all face the same fate as that of the extinct Dodo bird.