Apocalyptic headlines seem to be daily occurrences now. Here’s just a few headlines that grabbed my attention over the last week(click on them to go to the original article):

Why do we care?,’’ Abdalati, an ice scientist, asked. ‘‘This ice has been an important factor in determining the climate and weather conditions under which modern civilization has evolved.’’

Scientists sometimes call the Arctic the world’s refrigerator and this is like leaving the fridge door open, Scambos said.

‘‘This is kind of a knob on global weather,’’ Wagner said. ‘‘We don’t know the impact yet of fiddling with it.

When people in my house leave the fridge door open, I get pissed and close it. The electric bill goes up due to an overworked fridge trying to cool the food. The Earth, unfortunately, has no ability to shut the door that the human species has permanently torn off its hinges, irreparably destroying the thermostat. On the other hand, the Earth doesn’t really care that we have doomed ourselves to extinction.

Back in 2009, a Lieutenant Vasquez of the U.S. Navy made the following comments which sum up how industrial civilization is perpetuating its own demise:

“It makes me uneasy anyway to think that we’re going to let a trend caused by global warming – the melting of the ice – allow us to explore and exploit more fossil fuels, which led to the warming in the first place.

“That seems wrong-headed to me, but nevertheless it’s likely to happen and there’s already a debate about exactly who’s got the rights to the minerals and the oil that’s there under the Arctic continental shelf, and how to go about exploiting it.

“It’s unfortunate, from a broader view, understanding the science of what the future holds, but I think it’s inevitable because oil and gas are going to be extremely valuable in the coming century as supplies dwindle.”

Tree-ring chronologies from long-term climate records show the western U.S. drought is already the most severe of the past 800 years. It will exceed the 1930s-era Dust Bowl with more consecutive dry years.

Less rainfall is expected in the U.S. West in each of the next 80 years than the annual average level during the drought of 2000 through 2004, the op-ed continues. Schwalm (an earth scientist), Williams (a geographer) and Schaefer (a National Snow and Ice Data Center scientist) analyzed that extreme drought in a new study in the journal Nature Geoscience.

Climatologists say we will experience reduced agricultural productivity, scarcer water resources and carbon sequestration (plants turning carbon into oxygen). The climatologists previously reported in a scientific journal that drought already has halved the amount of carbon dioxide they normally photosynthesize.

OK, that’s enough to scare any of us who studied biology out of our wits. But there’s more.

Major river basins show flow reductions of 5 to 50 percent. Western crop yields are down by 13 percent, with many local cases of crop failure….

Right now we are living in the glory days known as the “wet years”. Our descendants, if there are any, will look back in anger at their forefather’s myopic and self-destructive worship of economic growth and profit at the altar of an economic system they proclaimed to be the greatest the world has ever seen – capitalism. As has been said by a few wise people, “We can either save ourselves, or we can save capitalism.”

The above article is in reference to a detailed scientific report covered in the NT Times.

…Climate change is projected to increase the frequency, intensity, and duration of droughts, with impacts on many sectors, in particular food, water, health and energy,” WMO secretary general Michel Jarraud said. “We need to move away from a piecemeal, crisis-driven approach and develop integrated risk-based national drought policies.”

Mannava V K Sivakumar, director of WMO’s climate prediction and adaptation branch, says only Australia has a national policy toward drought and the advantage of a policy – rather than a disaster management, which some countries have – is that national action is required no matter who is in political power.

Australia’s government says its 2004 policy is no longer sufficient to deal with climate change, however, and over the past two years it has tried a pilot programme in western parts of the country aimed at shifting from a crisis-oriented approach to risk management.

Sivakumar said the agency is also encouraging more continuing support especially for “the poorest of the poor”, small farmers whose daily wages determine whether they and their families will eat on any given day.

If you’ve been paying attention, our system of transnational capitalism and globalization has ushered in a global land grab which I blogged about here. From where I’m sitting, there appears to be no concern for what’s really sustainable or socially just, but what the monied interests can steal from the weakest and most impoverished living on our planet.

The spread of exotic diseases is a well-known effect of climate change, which is playing out before our very eyes in real-time today.

Leading water scientists have issued one of the sternest warnings yet about global food supplies, saying that the world’s population may have to switch almost completely to a vegetarian diet over the next 40 years to avoid catastrophic shortages.

Humans derive about 20% of their protein from animal-based products now, but this may need to drop to just 5% to feed the extra 2 billion people expected to be alive by 2050, according to research by some of the world’s leading water scientists.

“There will not be enough water available on current croplands to produce food for the expected 9 billion population in 2050 if we follow current trends and changes towards diets common in western nations,” the report by Malik Falkenmark and colleagues at the Stockholm International Water Institute (SIWI) said….

As George Dvorsky points out: “…it’s not enough for the researchers to suggest that switching to a non-meat based diet is the solution. Agriculture in general takes a tremendous toll on the environment and is a major contributor to the ongoing depletion of water reserves. It’s estimated, for example, that in the US, withdrawn surface water and groundwater use for crop irrigation exceeds that for livestock by about a ratio of 60:1. The issue, therefore, would seem to be one about the production of potable water and the development of more sustainable agricultural techniques…”
But I really don’t think we’ll be able to pack in a few more billion people on this planet at our current rate of destruction. Cannibalism might be how some get their allowance of meat in the future.

Life in the world’s oceans faces far greater change and risk of large-scale extinctions than at any previous time in human history, a team of the world’s leading marine scientists has warned.

The researchers from Australia, the US, Canada, Germany, Panama, Norway and the UK have compared events which drove massive extinctions of sea life in the past with what is observed to be taking place in the seas and oceans globally today.

Three of the five largest extinctions of the past 500 million years were associated with global warming and acidification of the oceans – trends which also apply today, the scientists say in a new article in the journal Trends in Ecology and Evolution.

Other extinctions were driven by loss of oxygen from seawaters, pollution, habitat loss and pressure from human hunting and fishing – or a combination of these factors….

…“It is very useful to look back in time – because if you forget your history, you’re liable to repeat it.”…

…“We need to understand that the oceans aren’t just a big dumping ground for human waste, contaminants and CO2 – a place we can afford to ignore or overexploit. They are closely linked to our own survival, wellbeing and prosperity as well as that of life on Earth in general.

“Even though we cannot easily see what is going on underwater, we need to recognise that the influence of 7 billion humans is now so great it governs the fate of life in the oceans. And we need to start taking responsibility for that.”…

…we need to stop releasing the CO2 that drives these massive extinction events, curb the polluted and nutrient-rich runoff from the land that is causing ocean ‘dead zones’, manage our fisheries more sustainably, and protect their habitat better….

I recall a quote from Philippe Cousteau Jr., the grandson of world-renowned environmentalist Jacques Cousteau:

”The question is, ‘when are we going to stop?”

Yes, that is the question of the ages. And the answer is that we won’t stop until our economic system collapses.
~~~~~~

…And the above article near my own stomping grounds. You know things are going haywire when flood insurance is needed for a suburban neighborhood located in the desert. 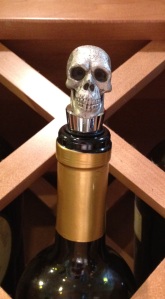